So this is love 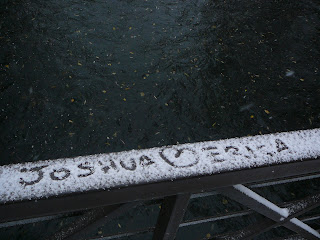 Once upon a time, in the far away land of Provo, there lived a lovely little princess named Erica. Princess Erica had pretty blue eyes that some days sparkled gray and that shined curiously whenever the hint of a thunderstorm tickled the skies. Spring was always her favorite season: rain showers made the smell of damp earth mix with the blossom’s perfume, green grass and wildflowers poked their heads up in the mist unusual places, and, best of all, the scampering and twittering of life began peeping through windows recently unsealed. One could breathe more royally in the spring, and when the princess looked down out her window toward the streets, she could spot more and more smiles everyday as the sun warmed the faces, and the hearts of each passer-by. This particular spring, as it just so happened, would prove to be the very best spring yet.

Masked Bandits Take All headlined the newspaper’s front page.  Princess Erica sighed; perhaps she should stop requesting the daily top stories to be brought to her: everything seemed so dreary. No gold, no jobs, more war, less peace. Every week the paper announced the Kingdom’s gold count to have dropped another half a percent, stolen by this bandit or that thief. There might be something more cheerful if she ever read the past the headlines, but that took more effort than she was willing to put in. At least she knew the important things, like King Obama’s coronation a few months previous.  A knock at the door interrupted Princess Erica’s contemplations. Her servant person, Mr. Facebook, opened the door a crack and shoved his face through.


"A note, your highness, from an old friend, I believe." With a wink he handed her the folded parchment, and disappeared.


"Dear Princess Erica," she began reading aloud, to no one but herself. "It was a pleasure to have happened into you yesterday. I do apologize however, that I did not inquire after our dear friend, Lady Battsetseg! Also, I was curious as to whether you would allow me to call on you some evening; my mistake was in not asking you this yesterday. I am anxiously awaiting your response, and praying that it is in the affirmative. Your friend, Prince Joshua."

For the second time that evening, the princess sighed. And, as all sighs do, it released a few very full paragraphs of inexpressible thoughts and feelings. Fortunately, though, this sigh carried happier meditations than the previous. A smile pricked at the corners of Princess Erica’s mouth as she reached for her favorite writing quill and a piece of clean parchment, blotted a bit of escaping ink, and commenced her response.

Prince Joshua walked up and down the halls of the outer courtyard of Princess Erica’s residence, but there was no one to be found. Where had everyone gone? Where was the princess? For some reason he’d been thinking about her all the time lately. They had first met a few years ago, but she was only an acquaintance. That is, she was only an acquaintance until Lady Battsetseg re-introduced them. Ever since, for some reason, Joshua felt drawn to her and couldn’t get her off his mind. So he’d made arrangements to escort her to the theatre tonight. But where was she? He thought he might try one more door—why must her castle have so many doors? Then suddenly from behind him a slightly familiar voice sent a chill up his spine.


"Hi Prince Joshua!" Princess Erica called out to him as, flanked by two attendants, she nimbly climbed down from a porch that didn’t seem to have been there a minute ago.

The fare at the theatre that night was Shakespeare, but in the company of one another, the couple would have been entertained by any show. The two were fast friends, and as their romance began to blossom, Prince Joshua found one reason or another to escort her back to her abode almost every night.


One night, the pair went on a walk through a part of town that they hadn’t seen for awhile. A cool rain was falling gently as they walked, hand in hand, towards an old estate that had once been occupied by the mayor but had long since fallen into disuse. Quite sure that they were alone, Prince Joshua stopped walking, turned and looked at Princess Erica. He was at a loss for words, but they really didn’t need any. They kissed; then he whispered: "I think I picked a bad time to fall in love." As if confirming what Prince Joshua had just said, a ghoulish voice with a single glowering eye approached them, ordering them to leave its lair at once. The two fled back to Princess Erica’s castle. After they had kissed goodnight, Prince Joshua was too happy to be concerned about what would become of them when he left in a few days on his long journey to a faraway land.


That summer was full of adventure, learning, new friends, and a great deal of missing each other. Months passed with long letters dancing across oceans and continents. 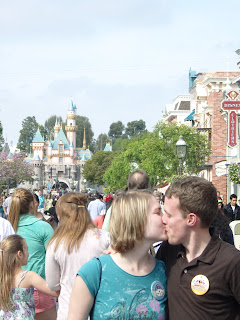 Finally, Prince Joshua returned and found more excuses to spend time with Princess Erica. One night, after a grand time at the opera, Prince Joshua took his love to a spot by the river Provo where they could dance. After a few songs, he couldn’t take the suspense any longer (and neither could she), so he knelt and asked her to marry him. She said yes.


And while neither of the two are perfect, they are perfect for each other.

i love it! especially the last line. nice and catchy.

I love this :) What a sweet story. It needs to be illustrated and put in a children's book. I'd read it to Olivia.

that's a good idea, Katie. I will make Charles a book someday. I'll have to add him in it, though!

I know you haven't heard from me in a while, but I just wanted to add my two cents in.

I also loved this. Makes me want to write something like this for our story.