The nursery at our church welcomes children ages 18 months to 3 years. They are old enough to play nice, eat snacks and be separated from their parents for two hours (at least theoretically). Despite the best efforts of very kind nursery leaders, it is still a trial and tribulation for Charles every time we drop him off after sacrament meeting.  We are told that he cries for a minute or two after we leave, then calms down and plays with the cars. But whenever the door opens and somebody new comes in, Charles is reminded of his parents and gets very sad and tries to escape.  This photo was taken by a friend as he walked in to pick up his niece and Charles runs toward him (and the open door), car in hand.  Charles succeeds in making a pouty face that is almost as cute as his smiley face. 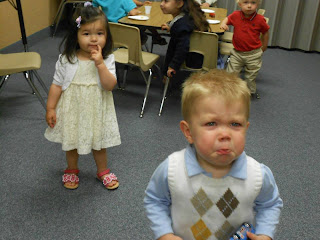